What Kind of love stories have u ever seen or heard?

That Romeo and Juliet?

NO! That’s too scary for me…and well so sorry to say, it’s kinda fool story instead!

How about The love story between London and Jammie in “A Walk to Remember”?

Yeah, I kinda like that love story, ooopss no, I like the movie not the love story, because I can’t stand seeing our loved ones suffered and died from a disease. Because in that story, Jammie had cancer and died so soon, not long after they got married. Very sad indeed 😦 *i cried over and over again everytime watching it*

The love story between Jesse and Celine in “Before Sunrise” movie, has been one of my favorite of all times. The first shallow reason was just because of Ethan Hawke played as Jesse, my favorite actor. What else can you say about these two love birds who fell in love through the long conversation they had in the train when their first met, and they just did a very sweet conversation all night long until the sun rises. 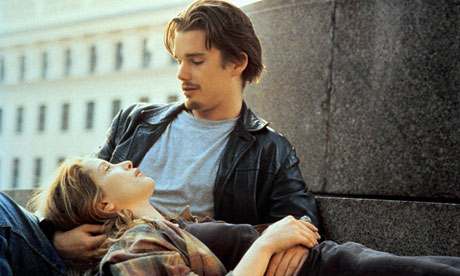 Ethan Hawke and Julie Delpy on Before sunrise

Ok, well that’s enough from the movies, Of course there would be tons of love stories we’ve seen, read, and heard.

This time, please allow me to tell one of the love story of my beloved friends :

“SF” (The woman) and “AK” (The man) . Sorry I cannot not mention their complete names.

Thei first met was on 1999 in our lovely green campus near Lembang, in Bandung. A boarding campus (what’s the term? ahhh it’s like a boarding school but this one with college students).

AK is the senior and one of our “pembina ospek”, while SF is the junior or freshman who just started college life.

AK is a funniest guy in that campus, funniest here means he has  a great taste of humour. Everybody knows AK, because AK is such a loveable person.

While SF, is a sweet, smart, an easy going person and of course a loveable one. I ‘ve known SF since we were in Junior High, and we met again in college.

So, long story short, these two loveable persons fell in love each other.

One of everyone’s favorite couple at that time.

Their love stories continued until they graduated and even until they work.

And finally I forgot maybe on 2008 they finally got married. I came to witness the holy matrimony and the wedding reception. You can guess how many people came to their wedding, beacuse like I told you before that these two lovebirds are so loveable. EVERYBODY LOVE THEM. Especially AK, The guy with lots of humors and always cheerful….he always spread a positive energy to whoever he met and talked with. He’s such a nice guy, and SF is just so lucky to have him. No! they are lucky to have each other, because SF is such a smart and loveable too. Well, I should mention the word”LOVEABLE” many times, because that’s  the best word can describe these two loveable people.

Not long after they got married, SF gave birth to their first child, a lovely baby girl. Their love’s life seems so complete now. SF and AK look so happy until many years after.

I have seen a beautiful love story here. Between SF and AK. Oh no, wait….this is the most important part I would like to share with all of you.

One day, I forgot on what month on 2013, “AK” was detected by doctor to have a brain tumor. I did not know how’s exactly the story about his disease, until a week a go there were so many birthday wishes for AK on facebook. Saying a happy birthday and a get well soon message. I asked myself, what kind of diseases he has suffered from? and I remember Hanna my friend told me once about him, that we should pray for AK, he got a medical check up in Penang Adventist hospital few months before. Oh know I can guess something worse has happenend.

On Februay 4, on his 36th birthday he has to be hospitalized because that tumor on his brain has attacked him so hard.  So sad! And on February 6 AK has to to got an operation, Thank God that all went well until the operation done. AK still in the condition of unconcious but his body was able to response. (Well, I coudn’t explain in details about what kind of responds he has shown, because I was not there to witness.)

There were so many “get well soon-messages” on my timeline for AK, and on Monday morning SF posted a status on Facebook (she rarely open FB), she explained how grateful she was about the condition of his husband that he’s getting better after the operation. Then I smiled, and feel grateful as well.

Then I was so shocked when I read again that we need to take time to kneel down and pray, because AK’s condition has dropped and his body was not  responding anymore. We took time to pray, the doctor has done their best they could do. The condition is not getting any better. Until I read the timeline on Facebook (Well, facebook tells eveything here), so many update status saying : “Rest in peace AK”…………

Of course no! AK should not leave us this soon. He shouldn’t leave his beloved wife and children!

He’s gone too soon! he has a family to take care of.

I couldn’t believe this, so I texted Hanna (she still related to AK, Hanna’s brother got married with SF’s sister)

And yes there’s a missunderstanding about the news. According to the doctors AK has passed away but the family insisted to ask another try of putting all the medical stuff that supported AK’s body. So the doctors put them on again, and amazingly AK’s heart was beating again. Everyone was so grateful and lots of people came to pray for AK. Yes, lots of people came to hospital to pray for a miracle happen. The doctor told the family that AK might survive until 4 hours ahead. But all of us still pray that God will show some miracles here.

Surprisingly, AK still survive until morning, he really fight to survive, but I think he’s so tired to fight and we know we’ve been so selfish to ask him to fight while his body asked no more. Then he passed away. On Febrruary 12th 2014, AK, a man with big heart! a man with a great wife, a man with three beloved children…..he’s safe now in the arms of Jesus Christ!

On Wednesday night lots and lots of people came to say goodbye to this loveable person…. I should say he’s so famous like a celebrity. The reason people came to see him for the last time was so simple, yes,,,, because he’s just too loveable…..

The saddest part of this story is, he left a wife with three children. The oldest one is almost 6 years old, the second child not even 2 years old, and the youngest one was the only one son they got, a baby boy and he was just born 3 months a go. So, SF just gave a birth to a baby boy 3 months a go and she’s still on maternity leave at this time. I can’t hold my tears again….. but seems SF is such a strong ang great woman. She can stand still, recieving all the guest coming to say farewell to AK….and when my turn to say condolence for SF, I can’t hold my tears and just cried….and yes I think I wishepered on her ear :” I know you are a strong woman, I pray for you and your family”  (and now I’m crying when I type this)

I can’t imagine myself if I were on her position. I could die too bringing myself with my beloved one.

But I could see how big the love they have here. I have no worries with SF that she could bear all of these, because AK has shown his great love and he keep showing it through their 3 lil’ angels. SF will survive with the love they have….she is such a great woman. That’s all that I can say.

I know it’s not easy for her, but the love of AK will strengthen her and the power of Jesus Christ will guide her to continue the journey of their love story through their children.

I should tell that even on the first time the doctor told AK about there’s a tumor on his brain, guess what was his answer? “Oh, baru tau kalo selama ini saya punya otak”………………..

He always being humorous even in this kind of situation. He always love to make people laugh!

And now, no one will call me “KC and JOJO” anymore whenever we met 😦

We love you AK, but God loves you more.

Happy Valentine’s day to you and your wife….

DO NOT COPY! BE ORIGINAL

Thousand Words of Mine

some blah blah about this and that

it's the happiness, sadness, anger, and silly stupid things that color my life

The bees are buzzin' in the tree, to make some honey just for me~

Full-time blogger, part-time housewife, husband lover who lives to express, not to impress..

here and now, i only have words to tell you!

"Kindness is the language which the deaf can hear and the blind can see." Mark Twain

BebenyaBubu - Stories of an Indonesian stranded in Sweden
Dance With Life

A journey of a thousand miles begins with a single step

Life is a Rollercoaster

My Blog, My Stories

For The First Time and Forever

Do right. Do your best. Treat others as you want to be treated ( Lou Holtz )

Say Helloo, Please, and Thank You!

Talk about family, daily life, living, and us

i'm a learner, not an expert..

Our Journey in Love and Life

The Footstep of My Life...
Life lover

It's not a diary.. it's my online blabs

it's all about our story

A bowl of mixing minds

sewing, patchwork, quilting, and some randomness

All we have is all we need. All we need is the awareness of how blessed we really are.

Because when you're looking back life is pretty awesome

you make me smile

Family fun without breaking the bank

ONE HEART, ONE SPIRIT, TO INSPIRE

welcome to my silly world

Thousand Words of Mine

some blah blah about this and that

it's the happiness, sadness, anger, and silly stupid things that color my life

The bees are buzzin' in the tree, to make some honey just for me~

Full-time blogger, part-time housewife, husband lover who lives to express, not to impress..

here and now, i only have words to tell you!

"Kindness is the language which the deaf can hear and the blind can see." Mark Twain

BebenyaBubu - Stories of an Indonesian stranded in Sweden
Dance With Life

A journey of a thousand miles begins with a single step

Life is a Rollercoaster

My Blog, My Stories